Grid Reference -   TG072179                           What3Words- reverses.rats.prime
​Sparham Pools are just northeast of Lyng village at TG072179 (Landranger 133),
Post Code NR9 5QY. Take the A1067 Norwich to Fakenham road. Between
Lenwade and Bawdeswell turn south towards Lyng. Follow the road down the hill for
¾ mile. The car park is poorly signposted on the left at the bottom of the hill (look out
for the Wensum Wat Trail path sign) and shortly before the bridge over the River
Wensum.
It consists of 12 ha of freshwater pools surrounded by remnant scrub heath and
woodland.

Birds in autumn/winter
A variety of ducks including shoveler, gadwall, tufted duck
and pochard. These may be joined by goosander, little grebe and occasionally
goldeneye. Siskin and redpoll may be found in the alders which grow on the banks of
the pools, treecreeper and nuthatch in deciduous woodland trees around the pit.
Winter thrushes &amp; meadow pipit on the surrounding fields and hedgerows.

The site is leased to and managed by the NWT and there is open access so no
permit is required. The NWT has a policy of having no dogs on their reserves unless
they are required for assistance. There is a public footpath (part of the Wensum
Way) leading from the car park at TG073178 along the northern edge of the site and
there is a permissive path around the rest of the site. Grazing cattle may be
encountered on the southern section so care is needed.
​
From the eastern side of the site good views can be gained over the adjacent fishing
lakes where similar waterbirds may be found plus little egret, common buzzard, barn
owl and occasionally great white egret in recent times (i.e. since 2019). 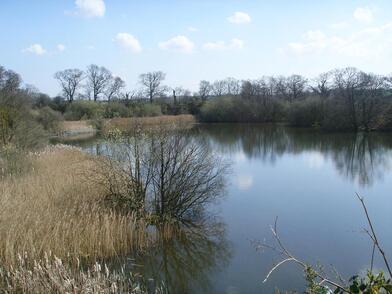