Water meadows follow the banks of the River Yare along the western fringe of Norwich. Much of it
can be flooded in winter, but the raised riverbank is usually passable at the Earlham end, and paths
from Bowthorpe Southern Park are always open. There are flooded pits that are excellent for
Dragonflies and Damselflies, and the Norfolk Hawker can be seen on the river. The woodland and
scrub along the edges of the marshes are home to warblers in the summer and to common garden
birds all year. Waterfowl are attracted to the flooded areas and the river at any time, along with
various heron species.

Access:
There is free parking at both ends of the walk. On a layby on the B1108 next to the Church of St
Mary, opposite Earlham Park. NR4 7TH. At Bowthorpe Southern Park carpark on Three Score Road
NR5 9HY. On foot the marshes are reached by numerous footpaths from the city and by a path and
footbridge from the B1108 almost opposite the turn to the hospital. There are no facilities, but
toilets in Earlham Park across the B1108. 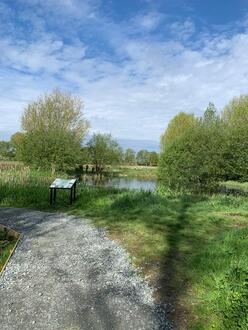