Alderford Common is an SSSI, the particular interest being the chalk grassland. A thin layer of glacial sands and gravel cover the underlying chalk which is exposed in abandoned marl workings. The open area is surrounded by woodland and a stream from the River Wensum runs along one wooded edge. The Common itself is fenced so that grazing can take place to maintain the habitat, kissing gates for access.

Species
Common woodland bird species are present all year.
Summer visitors can include Garden Warbler, Common Whitethroat, Blackcap, Chiff Chaff, Willow Warbler, Cuckoo occasionally heard, and Turtle Dove is maintaining a presence.
Butterflies, Dragon and Damselflies are to be seen, particularly near the pools in the woodland area, as well as other species of insect.

Access
There is a small car park on Reepham Road, just east of Alderford
village. The site can be accessed as part of the Winch’s Way walk. Be
aware that access via the latter can sometimes be very overgrown and
involves steps down to the common. Entry to the woodland can also be
overgrown if accessed via the steps near the pool. 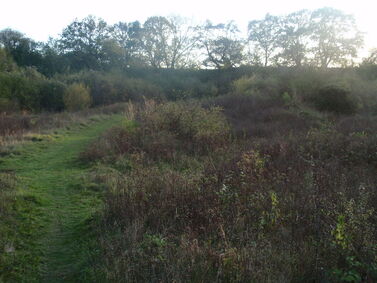